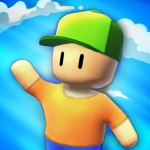 Stumble Guys is a multiplayer battle royale game for up to 32 online players that combines simple gameplay with extremely exciting knockout battles. Players participate in the obstacles to overcome races, running and jumping to reach the finish line, and only the fastest one wins the crown. To take down other opponents, players have to try not to fall off and throw the opponents down. The other opponents will also try to do the same, so be careful!

Stumble Guys is developed by Kikka Games. This Takeshi Castle style game gives players fun, thrilling, and addictive battles. Players can join with friends or other online players. If you fall, get up and start running again and again until you reach the finish line. This is an endless running game. Picking up interesting elements from Fall Guys, Stumble Guys is one of the best spin-offs of the hit game. What are you waiting for ? Start the fierce battle now!

Learning about the levels in Stumble Guys before starting the challenge is very important. Here are some tips about how obstacles work to make it easier for you to win:

How to play Stumble Guys with your friends

Get Stumble Guys now and join the fun!